Adelaide and South Australia has become the number one choice for international delegations of entrepreneurs and government representatives but why?

Whether it is agribusiness, app development, aquaculture, clothing, counselling, creative economy, digital agencies, edutech, food, gaming, handicrafts, health, innovation labs, jewellery, jobs, online market places, SaaS, tourism, trade, wine and youth exchanges there is so much to be inspired about as described by recent delegations from Ecuador, Philippines and Indonesia. 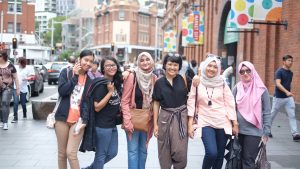 The Ecuadorians had a focus on women in business and export, Filipinos on agribusiness and eco-tourism, and Indonesians on scaling up their businesses with the group including entrepreneurs and ‘unicorn’ companies.

Stories from entrepreneurs like Sarah Gun from GOGO Events who is employing people on a path out of homelessness, strong support from the South Australian government, encouragement of coworking, startups and the entrepreneurial ecosystem, as well as Adelaide’s goal of becoming a smart, gig city are all impressive benchmarks for other countries.

Lita an entrepreneur from Doctor Slide based in Indonesia says, ‘I’ve learnt from Sarah Gun (Gogo Events) to always align our business from purpose and profit at the same time, also love the way how South Australia manages its smart city ecosystem which could be good benchmark for us to share with Indonesia colleague back home then; and for sure the aspiring Rising Sun Pictures inspired me to get on-track with my own dream in making such a well-known, internationally recognised company like RSP!”

From award winning pitch experts, to global brands and experts plus supportive mentors, Adelaide is a collaborative environment that is second to none.  Many challenges have been faced and overcome in South Australia with connected networks into countries all around the world, informally and formally for example sister city relationships with cities like Austin in Texas.

Recently Minister Kyam Maher MLC and Nat Cook MP hosted an outstanding group of 25 entrepreneurs and Ministry representatives from the Indonesian Government, with delegation members pleasantly surprised by the level of humility demonstrated and support for local businesses.

Antonius from the Indonesian Government highlighted, “As a Government Officer, I learned a lot from this program especially how Australia’s governments develop a good environment for developing startups and young entrepreneurs. I have also built connections with government colleagues and will continue our discussion and collaboration in industrial sectors.”

Capping off the 5 day visit from the Indonesian delegation is a connections session with South Australian entrepreneurs, a networking lunch at the New Venture Institute, Flinders at Tonsley, a tour of TAFESA at Tonsley and the story of FCT Flames who produce torches and amazing fire and water effects for the Olympic and Commonwealth Games among other highly regarded events. 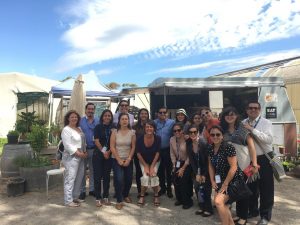 “Sometimes we don’t realise what we have here in South Australia and it takes an outside perspective to remember the level of innovation, collaboration and support in a state that faces challenging and motivating circumstances.  It is a resilient state and one where you have to change and get ahead of the curve to grow your business into a global leader.  Most people ‘have your back’ and that makes a big difference to our edge as a city and a state in Australia and when operating overseas”, says Wendy Perry, Workforce BluePrint and delegation host.